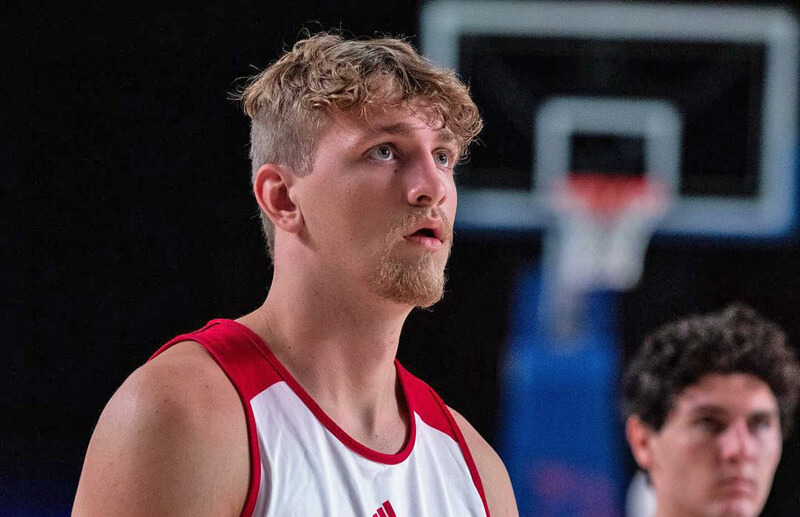 With the start of college basketball season on the horizon, we’ve transitioned from our look at other Big Ten programs to our player-by-player previews of the 2022-23 Indiana roster.

Today, our player profiles continue with a look at sophomore Logan Duncomb.

The offseason growth of Logan Duncomb was one of the key storylines to emerge from Indiana’s media day last month.

Duncomb, now a 6-foot-10 sophomore, barely saw the floor last season for the Hoosiers. The No. 73 recruit nationally in the 2021 class, according to the RSCI rankings, the Cincinnati Moeller product originally committed to Archie Miller.

After Miller was fired, Duncomb stuck with the program and new coach Mike Woodson. But after logging only 20 minutes as a freshman, Duncomb entered the fall as a question mark.

Media day, however, brought optimism that Duncomb will be a contributor this winter. Race Thompson and Trayce Jackson-Davis sang the praises of Duncomb’s offseason growth. Thompson pointed out that Duncomb was easy to move around in the paint in practice last season. That is no longer the case, according to Thompson.

“He’s heavy now,” Thompson explained. “Last year he wasn’t that heavy. You could move him around. This year, he’s holding his ground.”

So what changed for Duncomb in the offseason?

Health is at the top of the list. Duncomb started his IU career by missing both games in the Bahamas in August of 2021. He was often sick as a freshman, according to Thompson. In the spring, Duncomb had his tonsils removed. It was a tumultuous first season.

Duncomb also dedicated himself to making gains with his weight and his strength. He’s now listed at 241 pounds, the second-highest mark on the roster.

“I think it bothered him a little bit (that we could push him around last season),” Thompson said. “I think he really locked in this summer and focused on his body and took the weight room serious, took the protein shakes serious and putting on that weight serious. I think now he knows that he can hold his own. It’s only up from here for him.”

But even with the gains and praise from his teammates, Duncomb’s role is still up in the air. Indiana has one of the Big Ten’s best returning frontcourts in the country entering the season. And it was only bolstered by the addition of Malik Reneau, the No. 26 player nationally in the 2022 class according to the RSCI rankings.

If Duncomb is to play regularly, he’ll have to offer a level of production that doesn’t result in a significant dropoff. Indiana is planning to win and win big in Woodson’s second season. Playing Thompson and Jackson-Davis as much as possible along with the addition of Reneau could leave Duncomb on the fringe of the rotation. If, however, Duncomb can be impactful when he’s on the floor, it will allow more rest for Thompson and Jackson-Davis, who both began to fatigue near the end of Indiana’s run last spring.

“He’s different than he was last year,” Thompson said. “You can see it on the court. He’s smiling. He’s playing hard. He’s talking a little bit of trash. It’s a lot of fun to watch him grow and just get better overall.”

Bottom line: Woodson has talked in the preseason about playing a rotation as deep as 10 players. If the Hoosiers do play that many guys regularly, Duncomb will be in a battle for minutes with Reneau. Even if his role ends up being on the fringe of the rotation, this is an important year for Duncomb’s development. Indiana needs him to get experience to prepare for the future. Jackson-Davis is likely to depart after this season and Thompson will definitely be gone. With no frontcourt player committed in the 2023 class, there could be a major opportunity for Duncomb beginning in the 2023-24 season.

Quotable: “(Getting stronger) was definitely something I knew I needed to improve on. From last season to this year, I gained like 40 pounds. Just bring stronger and being able to hold my own. I can feel it like in practice against guys like Trayce. Before, I could get pushed out and not be able to really bash in there. Now, I can bash in there.” – Duncomb at media day last month.

Three overreactions to the 1-0 Celtics

What to Expect: Purdue at Indiana – Inside the…

Kings vs. Rockets: Start time, where to watch, what’s…

NBA execs wonder if Kyrie Irving acquisition may end up…

Mavericks vs. Jazz: Start time, where to watch, what’s…

Thunder vs. Warriors: Start time, where to watch, what’s…

Bucks vs. Blazers: Start time, where to watch, what’s…