Much of the NBA is settling in for a long wait on hold before the Kevin Durant situation is resolved. But one league executive believes there could soon be a chance for clarity at least. “What I’m hearing is that KD is going to meet with the owner this week,” the source told Heavy Sports. “He’s going to go directly to the owner, Joe Tsai, sometime this week. We’ll see how that works.”
Source: Steve Bulpett @ Heavy.com

Steve Bulpett @SteveBHoop
New:
Source tells me Kevin Durant is expected to meet with Nets owner this week: “I have no idea what’s going to come of that meeting. There are some things that KD is unhappy about, and I’m not sure any of that gets fixed here. But maybe it does.”
bit.ly/3cQ0Tu4 – 4:14 PM

Keith Smith @KeithSmithNBA
Passan tweeting about the Soto trade.
Schefter tweeting about major punishment for the Dolphins.
We need Woj to drop a KD or Mitchell trade ASAP for the trifecta. – 12:04 PM

Doug Smith @SmithRaps
Is today the day the Blue Jays trade for Kevin Durant? – 8:51 AM 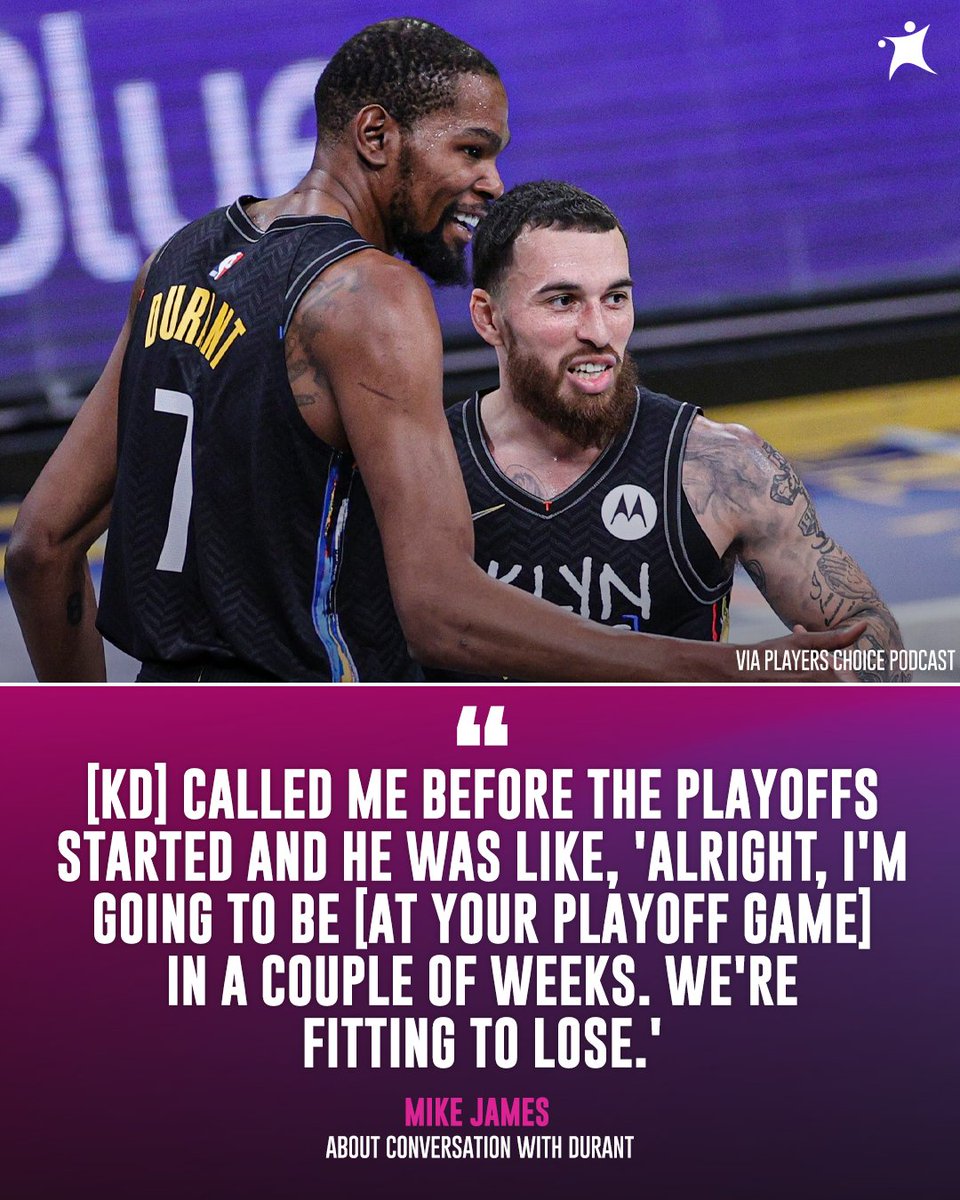 Henry Abbott @TrueHoop
While @jshector and @David Thorpe were on vacation last week, I had extra time to think about Jaylen Brown, Kevin Durant, and brain science. truehoop.com/p/remembering-… – 3:29 PM

BasketNews @BasketNews_com
At first, Mike James thought there was no way Kevin Durant could come & watch him play in the EuroLeague playoffs.
But when the Nets started to lose in their playoff series, Durant was sure about making that trip to Europe ✈️
basketnews.com/news-175948-mi… – 3:18 PM

Duane Rankin @DuaneRankin
“I’m like, nah man, don’t put me in this. And next thing you know, somebody on TV was like naming the potential trade targets. Naming DA, me, Mikal. And I was like, come on man, but it’s the business.”
Cam Johnson 1st react to Kevin Durant’s request. #Suns https://t.co/qzW5vHzXhy pic.twitter.com/WEjGdLQ0hK – 9:29 PM 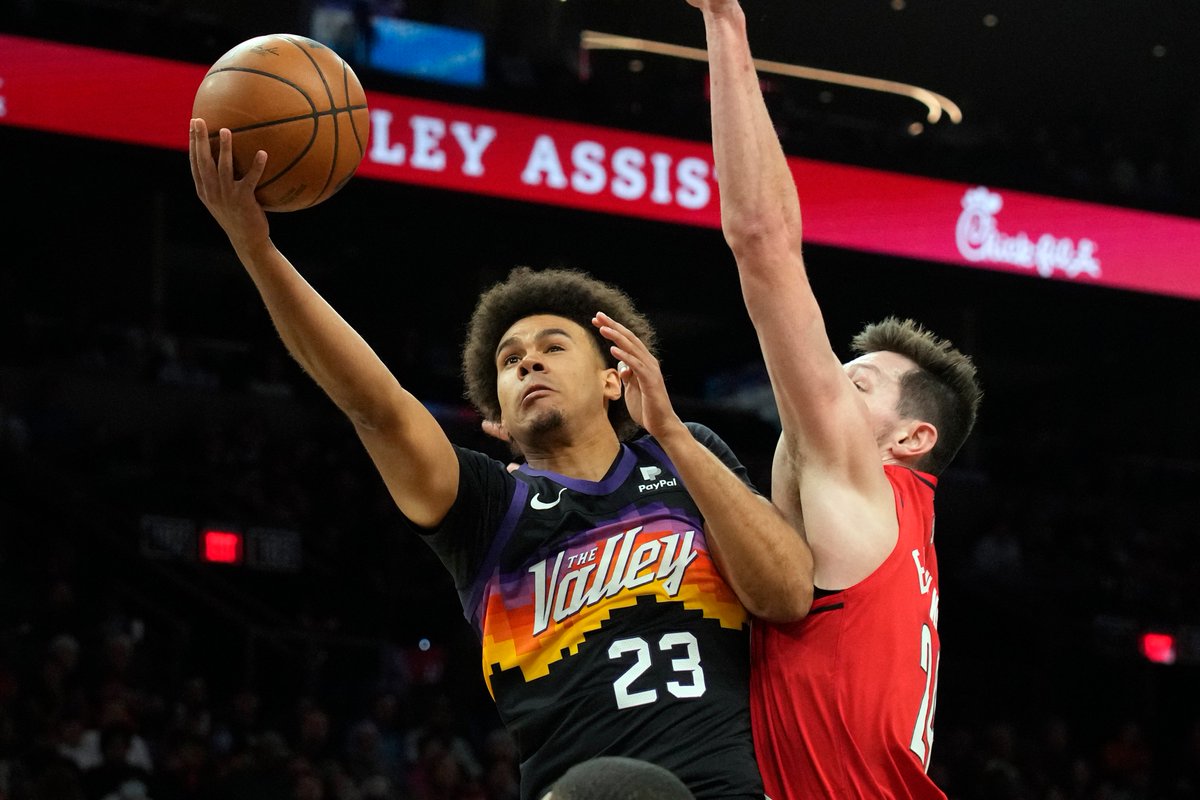 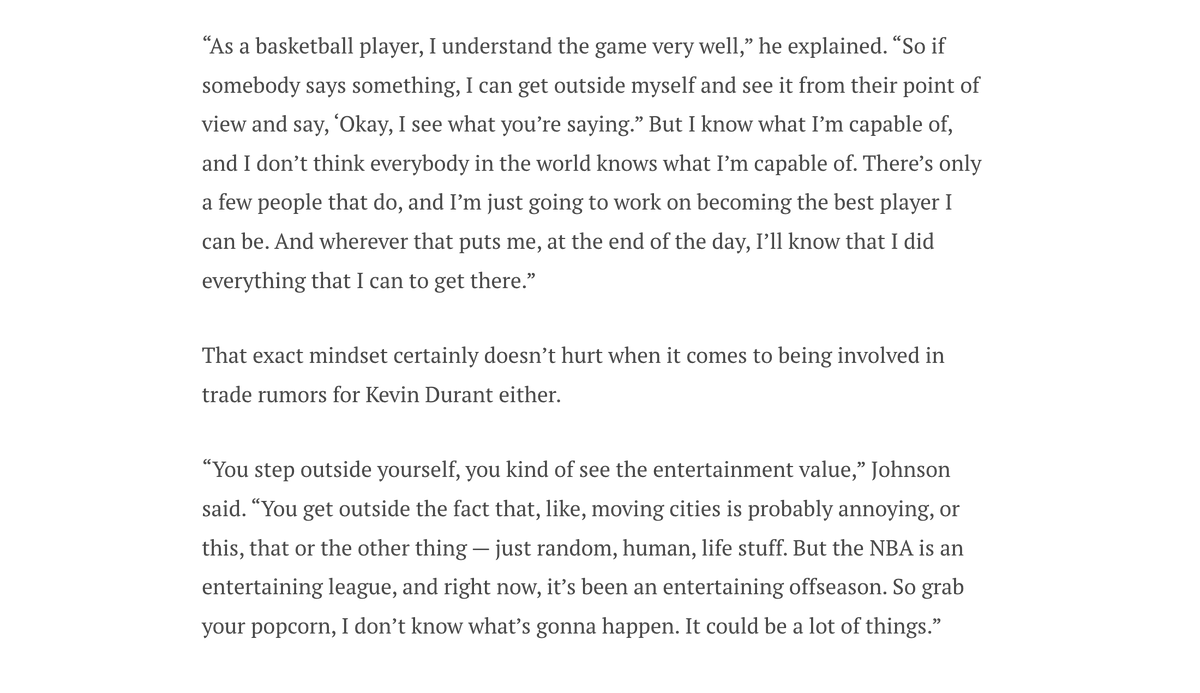 A. Sherrod Blakely @ASherrodblakely
We’re just about a month into KD’s trade request, and there hasn’t been much traction. He’s a generational talent, but acquiring him comes at a steep asking price. There’s another major concern if you’re the Celtics. fullcourtpress.bulletin.com/the-celtics-bi… – 11:26 AM

J. Michael Falgoust @ThisIsJMichael
The only downside of these pro-am games and stats is what the debate show cycle will do with them starting Monday and every day after provided they still have time after talking some more about Lakers/Russ/KD/Kyrie 😎 – 11:26 PM

Evan Sidery @esidery
The Suns seem content running it back while also holding out hope for Kevin Durant’s arrival. Even without Durant, Phoenix still forecasts as one of the best teams in the West.
For @basketbllnews, I explain why the Suns remain in a comfortable spot: basketballnews.com/stories/nba-ph… – 6:31 PM

Whether the intent of the meeting is to smooth over a relationship that suffered at least a hairline fracture when Durant, with four years left on his contract, asked to be traded is uncertain. “I don’t know,” said the exec. “I have no idea what’s going to come of that meeting. There are some things that KD is unhappy about, and I’m not sure any of that gets fixed here. But maybe it does.” -via Heavy.com / August 2, 2022

A personnel exec from another club expressed disappointment with the process. “I think there’s some teams that aren’t very happy that when they talk to Brooklyn it gets in the papers,” he said. “That doesn’t help. I’ve talked with a couple of teams that are not happy with the rumors that creep out of there through all this. It’s not a good way to do business.” -via Heavy.com / August 2, 2022

Mike James talked about their conversations leading up to Kevin Durant showing up to support him. James and Durant agreed that whoever’s season ended the first, the other would come to watch them in the postseason, he confirmed. -via Nets Wire / August 1, 2022

summaco 1 hour ago 0
All News

Hornets vs. Celtics: Play-by-play, highlights and…

Gordon Hayward (knee) to miss preseason game but is upset…