Draymond Green says he takes podcasting as seriously as basketball


I love the commentary, but it seems like it would be a lot. You play a game, then you post up and you’re doing the pod … Draymond Green: It’s all business, you know? The way I view my podcast is that I’m operating a business. Like, you can’t get tired of operating your own business, or it fails. So, it’s something that I take as serious as I do basketball. And so, if I’m going to show up for the game, I show up for (the podcast), or it doesn’t work.
Source: Sam Amick @ The Athletic

Michael Gallagher @MikeSGallagher
Draymond Green has more stars on his podcast (4.8) than points per game against the Boston Celtics this year (4.6 in five total games). pic.twitter.com/LghR6zSCIH – 6:13 PM 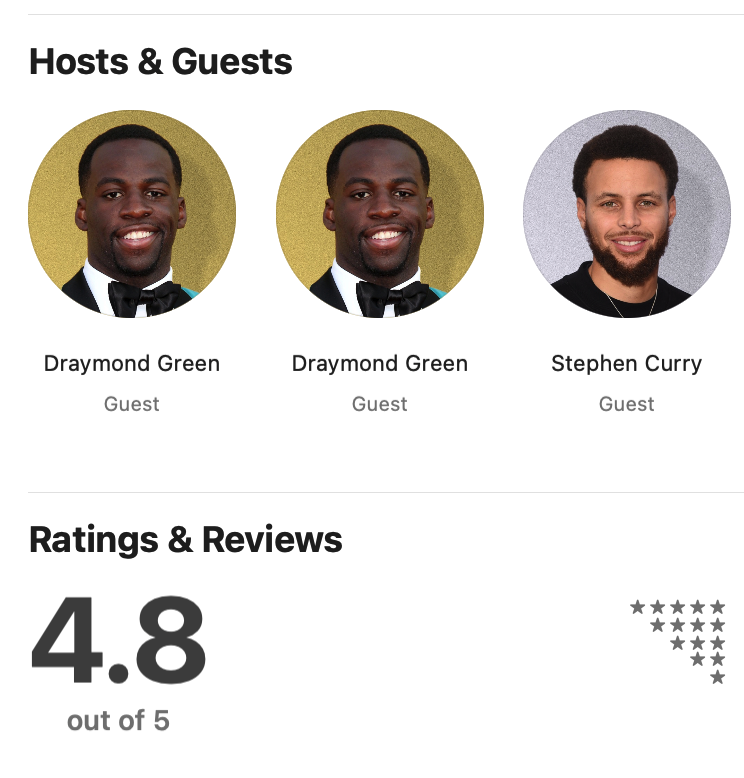 Dalton Johnson @DaltonJ_Johnson
“When you’re flowing on one side, you can flow on the other.”
On Draymond Green and his aggressive balancing act that’s badly needed on offense, defense and with this Boston crowd to beat the Celtics nbcsports.com/bayarea/warrio… – 4:42 PM

Chris Haynes @ChrisBHaynes
CJ McCollum informed Draymond Green after Game 3 that he picked Celtics to win Finals. Green replied, “That’s fine. Those Celtics will still be ringless just like you.” A @YahooSports story on how they both navigate the double-dipping player-media dynamic. sports.yahoo.com/how-draymond-g… – 4:10 PM

Stefan Bondy @SBondyNYDN
How would Barkley deal with Draymond?
“You just got to clock him one good time with a cheap shot. Draymond reminds me a lot of Rodman. Every time I played against Rodman I would just knock the hell out of him early and he would stop all those antics.”
nydailynews.com/sports/basketb… – 3:28 PM

Marc J. Spears @MarcJSpears
Celtics legend Paul Pierce said the Warriors have never faced a #NBAFinals crowd like they did in Boston in Game 3. Warriors forward Draymond Green, who was the center of the Celtics fans’ ire, begs to differ deferring to Cleveland. More in @andscape: bit.ly/3MCKMMw #nba – 2:58 PM

Marc J. Spears @MarcJSpears
“If it bothered me, I wouldn’t bring (my son). But he has to know, because he may be in this position one day. And if so, I’m going to sit right in the stands and watch him. And I’m going to say, ‘F— them’ back,” Draymond Green on the Celtics fans’ taunts. bit.ly/3MCKMMw – 2:23 PM

Austin Krell @NBAKrell
If the Warriors win the title, none of the Draymond podcast stuff really matters. If they don’t, it absolutely matters and is only amplified by the way he has played and continues to play in this series. – 2:21 PM

Dalton Johnson @DaltonJ_Johnson
Draymond Green: “We are a much better team when I’m aggressive offensively.” – 2:17 PM

Chris Biderman @TheWarriorsWire
When asked about his performance in Game 3 against the Celtics, Draymond Green didn’t hold back with a blunt assessment. warriorswire.usatoday.com/2022/06/09/war… – 2:16 PM

Jake Fischer @JakeLFischer
By now, you know Draymond Green dismissed his insightful podcast could provide any value to Boston after each Finals game. But several Celtics coaches are indeed listening. That’s a credit to Green’s widely-lauded basketball acumen, and his unique show: bleacherreport.com/articles/10038… – 2:13 PM

Rob Perez @WorldWideWob
it’s just an optics thing with Draymond. what players do with their time after the game ends is their own business. but since this is the Finals, they’re losing, and he’s playing poorly…his podcast is under the microscope. that’s what he wants, just not sure who or how it helps. – 1:49 PM

Dave Mason @DeuceMason
This wasn’t about Draymond’s podcast. It was about Robert Williams. pic.twitter.com/PZ70F44TLI – 1:41 PM

Joe Vardon @joevardon
The Steve Kerr-Curry-Clay-Draymond Warriors have won three titles, two different ways. Jaylen Brown and Jayson Tatum have taken away one of those avenues, @The Athletic theathletic.com/3356764/2022/0… – 1:21 PM

StatMuse @statmuse
The Warriors defensive rating this Finals:
113.6 — Draymond ON the floor
105.1 — Draymond OFF the floor
They are allowing 8.5 fewer points per 100 possessions with Draymond on the bench. pic.twitter.com/QhrvZOFwTJ – 1:15 PM 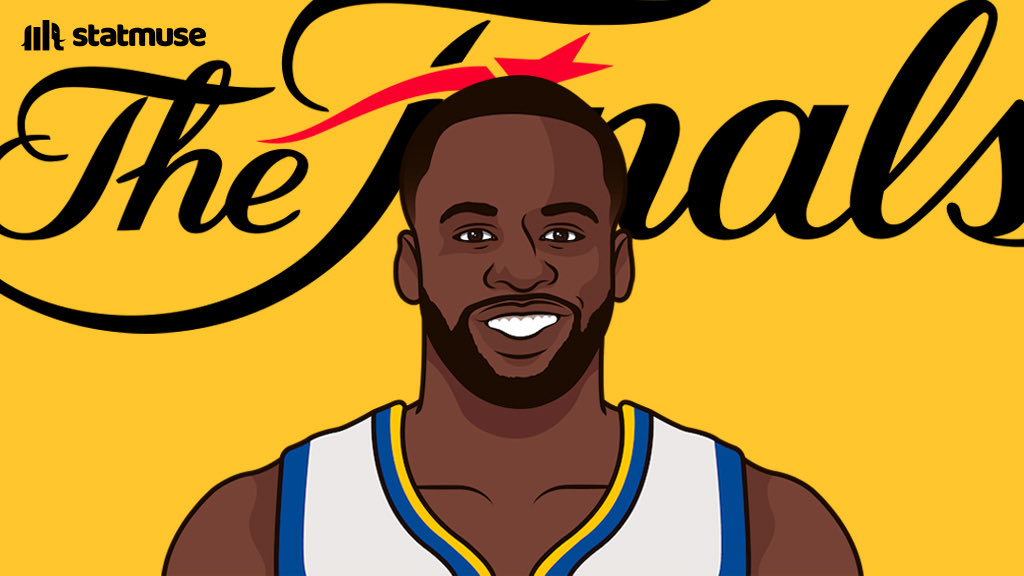 Marc J. Spears @MarcJSpears
“You’re in their head. It’s all how you look at it. They’re going to spend all their time focused on me, then clearly, you’re living rent-free in their head,” #Warriors star Draymond Green to @andscape on the “F-U” taunts by #Celtics fans. #NBAFinals #nba bit.ly/3MCKMMw – 1:08 PM

Vincent Goodwill @VinceGoodwill
After a lively exchange with a reporter, Draymond Green plugged his podcast, “The Draymond Green Show”. Friday night in Boston, it better be sports.yahoo.com/nba-finals-inj… – 1:07 PM

Michael Lee @MrMichaelLee
Draymond Green has to understand that it’s his play & not his podcast that has folks so irate. Nobody’d care when he’s yapping or what it’s about if he’s balling. But when you foul out & your stat line looks like you’re teaching your son how to count – 2-3-4 – criticism is coming – 12:24 PM

StatMuse @statmuse
Draymond has more podcast episodes (3) than blocks (2) in this Finals. pic.twitter.com/hQpbwARxlw – 11:26 AM 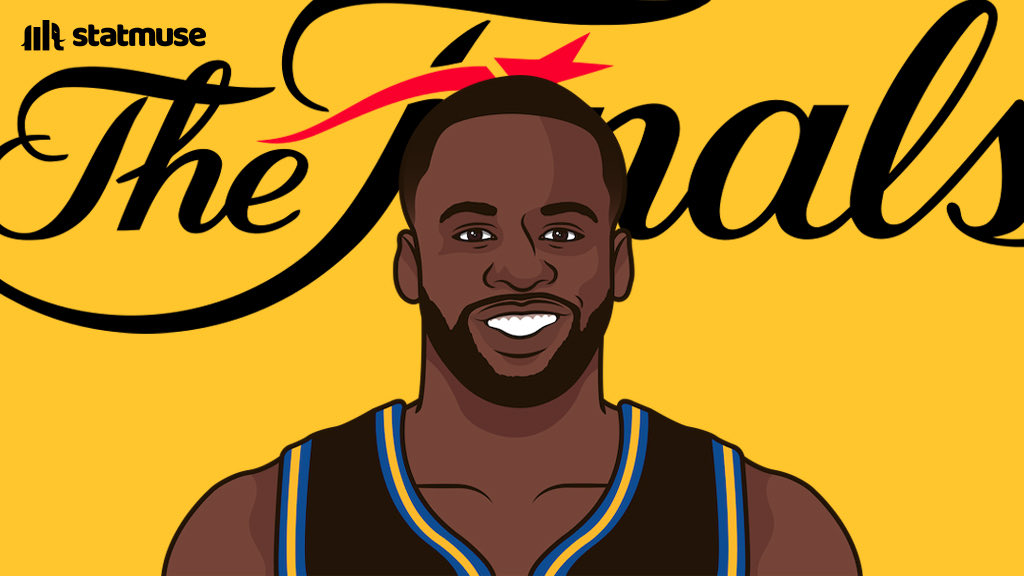 Krishna Narsu @knarsu3
It can both be awesome and funny that Draymond has been doing podcasts during the Finals. The criticisms are dumb but the jokes are A+. – 11:11 AM

Vincent Goodwill @VinceGoodwill
For ⁦@YahooSports⁩ More is required of an exhausted Stephen Curry, but if Draymond Green doesn’t return to form, the Warriors are going home, quickly sports.yahoo.com/nba-finals-inj… – 11:09 AM 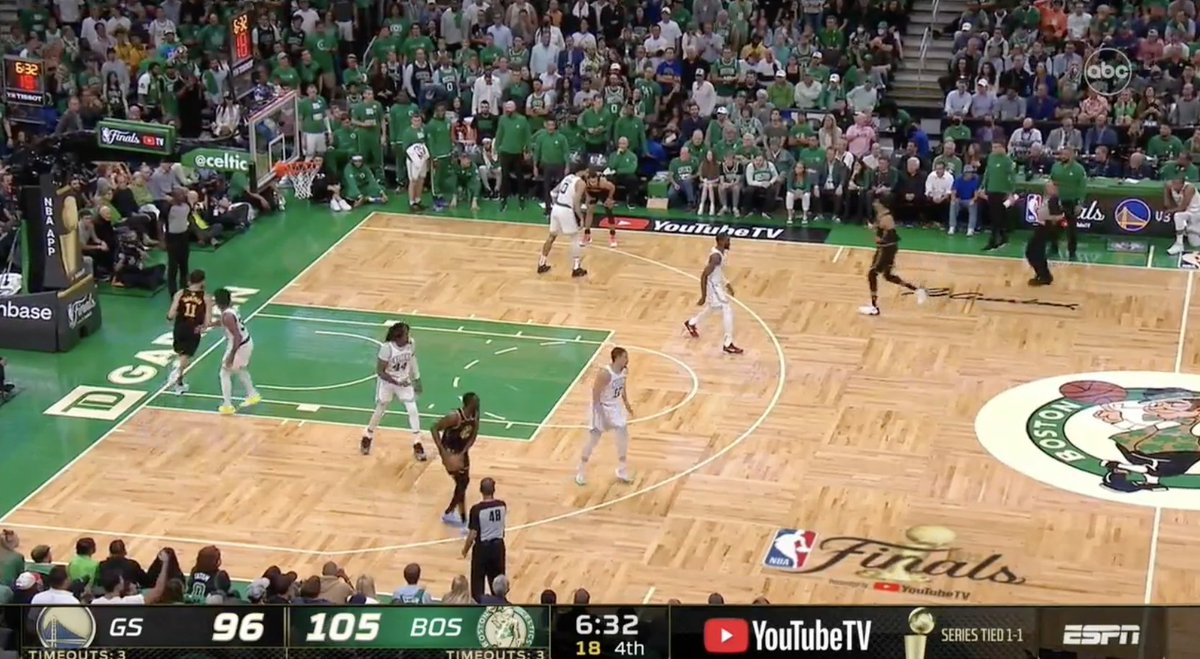 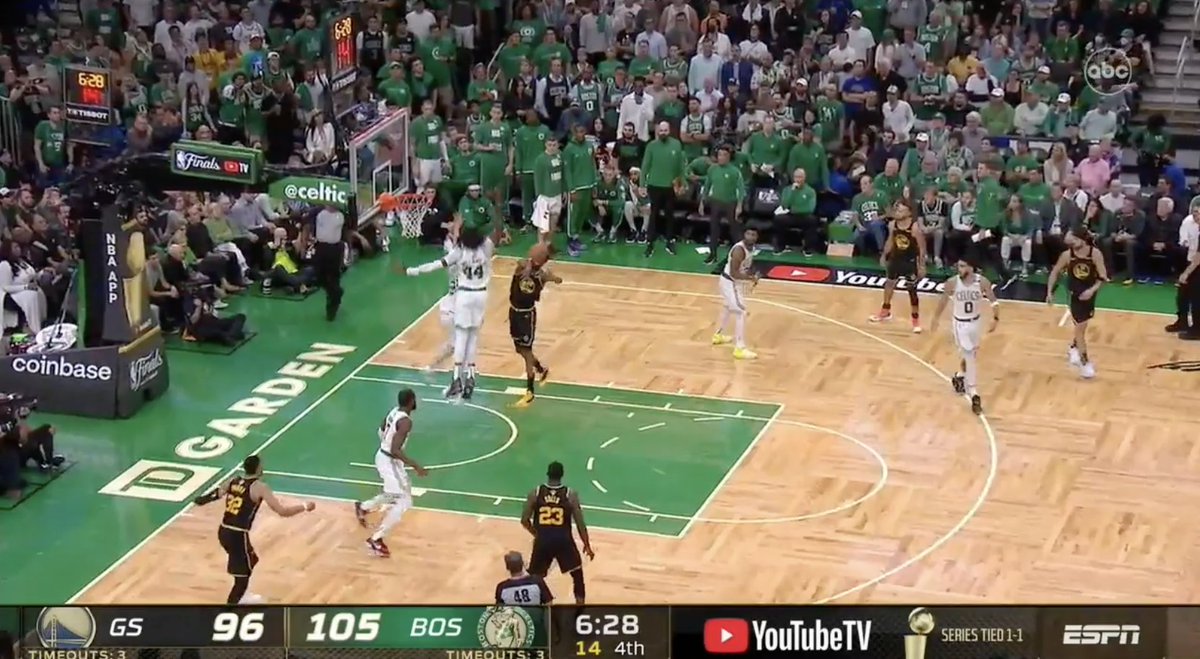 Kevin O’Connor @KevinOConnorNBA
In the NBA Finals, Draymond Green is allowing 1.24 points per play when he’s the direct defender, which is his worst of any playoff series since 2013-14, per @SecondSpectrum. pic.twitter.com/f3No6dgSbY – 10:58 AM

Chris Biderman @TheWarriorsWire
Boos and other chants echoed through Boston’s TD Garden towards Draymond Green during Game 3 on Wednesday night. warriorswire.usatoday.com/2022/06/09/ste… – 10:06 AM

Justin Kubatko @jkubatko
Draymond Green played 35 minutes last night, fouling out with just two points scored.
Over the last 60 NBA Finals, the only other player to foul out of a game with two or fewer points scored in 35 or more minutes played is Bill Laimbeer (1988, Game 6). pic.twitter.com/izeWgKa9HD – 9:41 AM 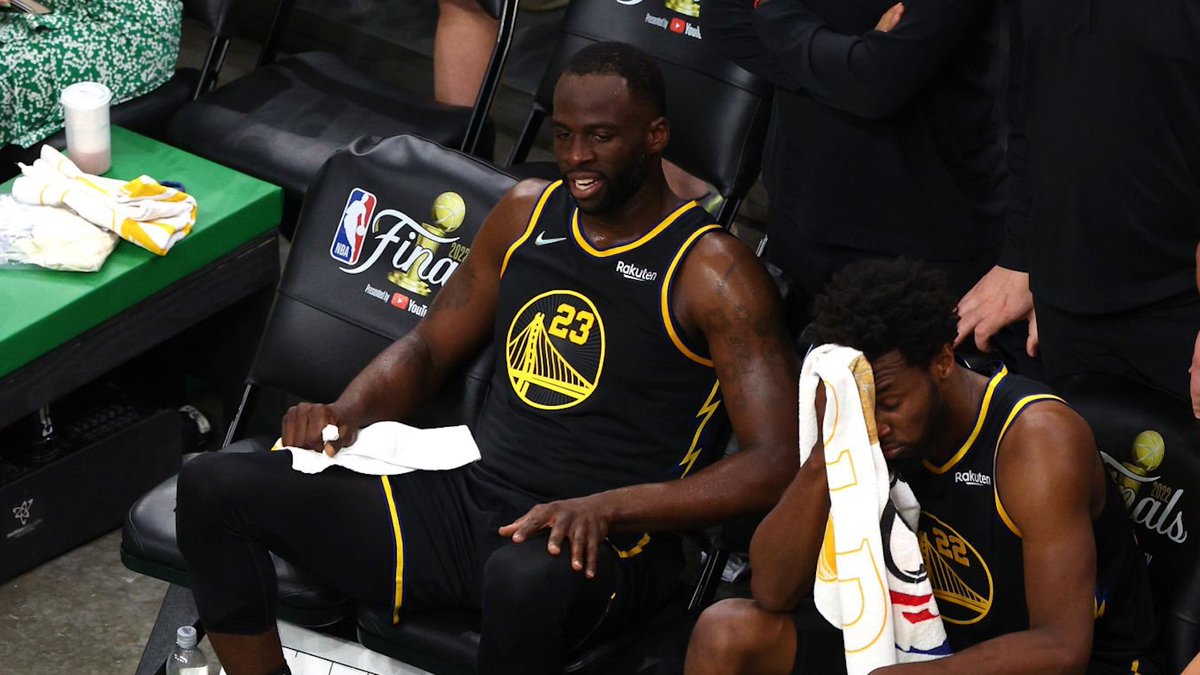 Jorge Sierra @hoopshype
Draymond Green goes back and forth with reporter. #NewMedia pic.twitter.com/t7iAome7PT – 9:16 AM

Tommy Beer @TommyBeer
Through the first three games of the Finals, Draymond Green is shooting 26.3% from the floor, 0.0% from downtown and 50% from the FT line.
He has as many fouls (15) as points and assists.
He has more turnovers than steals and blocks combined. – 9:02 AM

StatMuse @statmuse
Draymond Green this Finals:
— As many fouls as points
— More techs than threes
— More turnovers than baskets
He’s averaging 5/7/5 on 26/0/50% shooting. pic.twitter.com/IkrHIsPiec – 9:00 AM 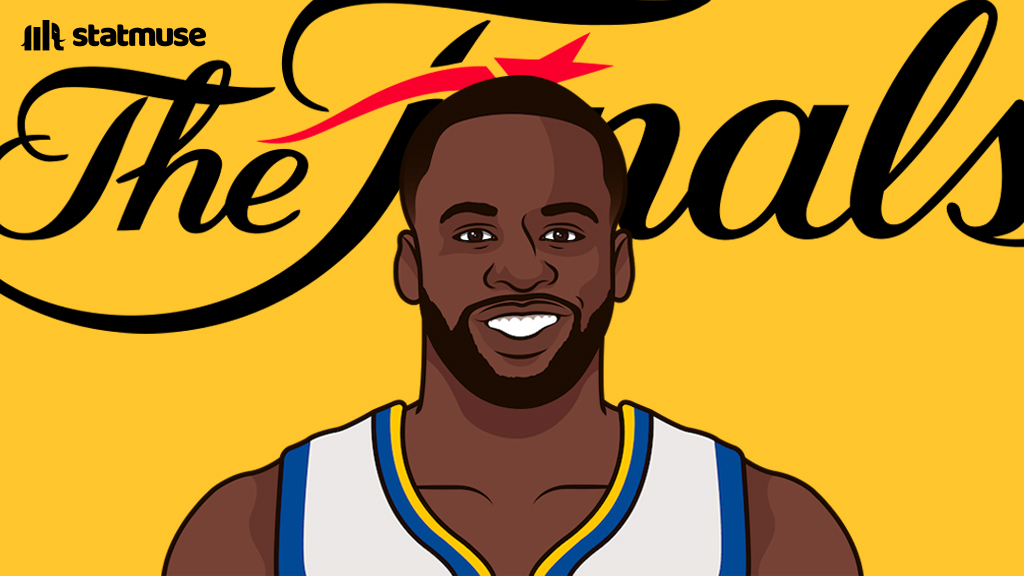 According to Warriors forward Draymond Green, who employs the very same flex and is known for his physicality, looks are deceiving when it comes to his longtime teammate. “He is strong. And when I say strong, I mean strong,” Green told ESPN. “Like, if you go in our weight room, and we’re doing dumbbell bench press, Steph is in the hundred club. Not many people get to the hundred club. His legs super strong. That change happened last year.” -via ESPN / June 10, 2022

“It’s incredible just how much he’s changed just in the seven years that I’ve been here,” says Warriors coach Steve Kerr. “I would say over the last three years, it’s been really apparent just how much his body has changed.” Added Warriors assistant coach Bruce Fraser: “He’s been lifting more than he’s ever.” -via ESPN / June 10, 2022

Yet multiple NBA athletic training sources say that Curry, the game’s most prolific 3-point marksman, is the best example yet to show how strength training not only doesn’t hinder the most valuable skill in the game, it amplifies it. “I never gave that any credence because there is a plan for how you can balance both,” Curry told ESPN. “You’ve got to maintain your flexibility and all that type of stuff while you get stronger. That’s something I guess I figured out.” -via ESPN / June 10, 2022